AS far as plans go, it’s an audacious one.  To throw the biggest street party outside of London on the doorstep of the most powerful politicians in the world, assembled in Birmingham for the G8 economic summit.  To bring England’s second city to a standstill and throw a big, smiley carnival in the face of vanloads of riot police, black-clad FBI agents and rooftop snipers.  Birmingham may have “welcomed the world” to the summit but I bet Reclaim The Streets weren’t on the guestlist.

The plan is the RTS usual – assemble at a pre-arranged point (the railway station) and then wait for the party’s actual location to be revealed.  It’s planned with a military precision and it works beautifully.  Within about half an hour, Birmingham, the car-infested heart of the British road network, is gridlocked by a chaotic rabble of day-glo dreads, hardcore clubbers and up-for-anything radicals.  Bemused Saturday afternoon shoppers lock themselves in their silent cars as they’re engulfed by the procession snaking its way out of the station.  The effect is quite incredible.  I lived in pollution-riddled Brum for eight years and this is the first time I’m able to walk the streets without my throat feeling like it’s been napalmed.

With the 5,000 revellers now occupying the city’s busiest intersection, things really start cooking when the sound system kicks in and the DJ drops tough Liberator acid.  Banners are strung between lamposts, impromptu drumming sessions start and the dancing takes off.  Meanwhile, the police stand impassively in lines, impotent in the face of the chaos about them.

Of course, events like these mean different things to different people.  For some it’s a protest at the inexorable pace of capitalism.  For others it’s about reclaiming the inner city for the pedestrian.  And for yet more it’s about getting twatted on Special Brew and dancing in the sunshine to banging techno.  But one thing’s for sure.  Today we glimpsed a different world, a topsy-turvy world where the rejected were accepted, the uninvited got to party and (almost) anything seemed possible.  For a few hours at least the beautifully-diseased city of Birmingham breathed that little bit easier. 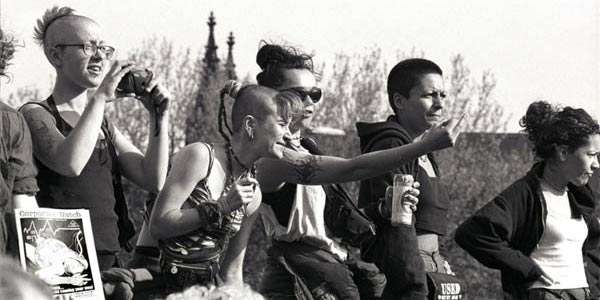