We Have Ways of Making You Talk

The case of Dr Charles Sell sounds like some sort of Orwellian nightmare. This dentist from St Louis, USA, has been charged, but never tried or convicted, of fraud. He’s not a paedophile or murderer, just an innocent man who, it is alleged, cooked the books for a few bucks. The doc was offered a plea bargain but won’t admit guilt to a crime he insists he didn’t commit.

And this is where it gets interesting. An appeal court has just ruled it’s fine for the government to forcibly inject Sell with mind-altering drugs, in an effort to make him “competent to stand trial”. In justifying their actions, the authorities have branded him “psychotic” and “delusional” and attested that drugs are the only way to get him onto the witness stand. They have held him without trial for over four and a half years – one and a half of those in solitary confinement – longer than any sentence for his alleged crime. Some say the government have it in for Sell because he criticised federal actions in Bosnia and Waco, Texas.

Dr Sell is being supported in his case by the Center for Cognitive Liberty & Ethics. This California-based, non-profit organisation defends freedom of thought and mental autonomy. It argues the court’s actions are an unconstitutional violation of Sell’s First Amendment rights.

“What’s happening to Dr Sell is unconscionable,” said CCLE’s Richard Glen Boire. “Dr Sell is innocent until proven guilty and under no obligation to think the way the government wants him to think. His mind is his own, not the government’s.”

Also opposing the ruling is the Association of American Physicians and Surgeons (AAPS).

“It’s a shocking, inhumane decision,” said a spokesperson. “Now all the government needs are allegations and a co-operative psychiatrist to forcibly drug any citizen.”

And it’s not just the usual liberal suspects who are backing Sell. One Phyllis Schalfly has leapt to his defence. She’s a sort of American Barbara Whitehouse, a syndicated columnist and founder of the ultra-conservative, pro-family Eagle Forum organisation. In branding the case as “shocking”, Schalfly berates the ‘Big Brother’ style of government. She notes that “several Supreme Court Justices have emphatically denounced any use of drugs as punishment.”

It’s clear the government’s actions fly counter to its so-called ‘War on Drugs’. On the one hand it’s spending billions to wipe away the ‘scourge’ of drug use from the streets. On the other it’s forcibly pumping a citizen with enough mind-zapping gear to fry a small nation state, let alone one individual’s grey matter. Timothy Leary must be turning in his grave.

The implications of the Sell ruling are monstrous. It gives the authorities a potential carte blanche to forcibly drug any citizen. As the CCLE put it: “This case is a signpost on the path towards an increased use of totalitarian tactics.”

More than 50 years ago, in ‘1984’, George Orwell predicted the misuse of mind control technology via state-sanctioned compulsory drugging. Now it’s no longer a fiction. Innocent until proven guilty? In 2002 we’ll be drugged until proven innocent. 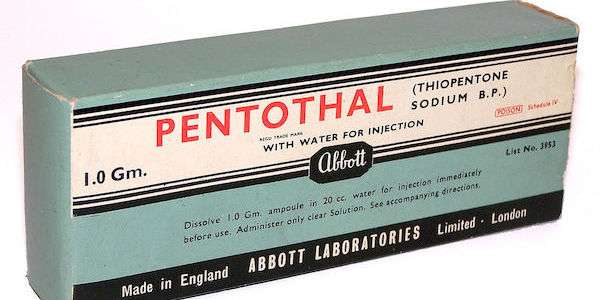