In San Francisco, the Pacific gateway to the land of milk and honey, there’s a rumble going on that has nothing to do with plate tectonics.  A socio-economic earthquake of such seismic proportions that people are being left homeless in their thousands, businesses are crumbling at breakneck speed and citizens are leaving the city in their droves.

The city’s undergoing an unprecedented period of ‘economic cleansing’, says the SF Bay Guardian, the region’s weekly liberal mouthpiece.  Statistics from the past three years read like a disaster report from the 1989 Loma Prieta quake: 8,000 residents losing their homes, 2,000 public housing units demolished, dozens of buinesses gone to the wall, and over 10,000 homeless persons eeking out a living on the streets.  According to their figures, it’s all a direct result of stratospheric rent increases, and the resultant influx of big shopping chains and monied yuppies working in nearby Silicon Valley.  Thus we’re seeing a transformation from a diverse metropolis welcoming immigrants and refugees from around the world to a homogenous, wealthy enclave.  Forecasts reckon that San Francisco may soon become the first fully gentrified city in America, the ‘urban equivalent of a gated bedroom community’.

Even Haight Street, the epicentre of the first Summer of Love in 1967, is facing the pressures of yuppification.  A decrepit old theatre, which locals want converted into a community centre, has been bought out by developers for regeneration into 19 upper class condos, each priced at upwards of a quarter of a million dollars.  Opponents say the development will destroy the character of the area, until now a haven for ethnic diversity, low rents and all-round bohemian culture.

The city’s first poet laureate, Lawrence Ferlinghetti, has added his two cents worth to the debate that has gripped the city, lamenting the loss of the very spirit that made San Francisco a ‘frontier for free poetic life’.  Ferlinghetti, literary friend of Allen Ginsberg and co-founder of the infamous City Lights bookshop, also bemoans the ‘theme park’ nature of his North Beach neighbourhood.  He wants civic pride restored by sweeping pedestrianisation of the inner city and painting the Golden Gate Bridge golden.

Of course, San Francisco hasn’t totally lost its frontier charm just yet.  A walk on the wild side, into the city’s oldest and liveliest neighbourhood, the Mission, confirms that.  There, gangs of teenagers hang out who proudly declare they’ve never seen the Golden Gate Bridge because it’s ‘not on our turf’.  Hustlers, chancers, users and abusers line the streets, panhandling for money or offering to sell you girls and drugs. Vigilantes even stalk the streets at night, defiling Range Rovers, fancy bistros and other signs of yuppie encroachment.

Whether those who have been the lifeblood of the city for decades – musicians, artists, students, writers, people on welfare – will let San Francisco become, in the words of Richard Walker, chair of Geography at UC Berkeley, ‘just another American city, a corporate city’, is unclear. But it seems doubtful they’ll give up without a fight.  After all, it’s a fate San Francisco has resisted for generations. 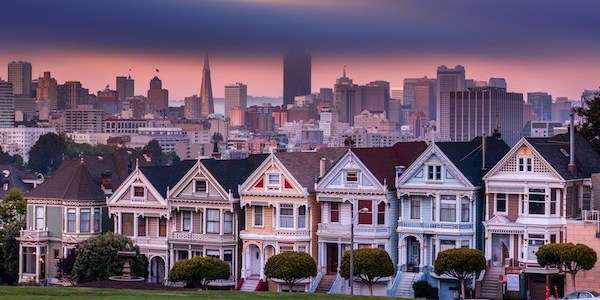